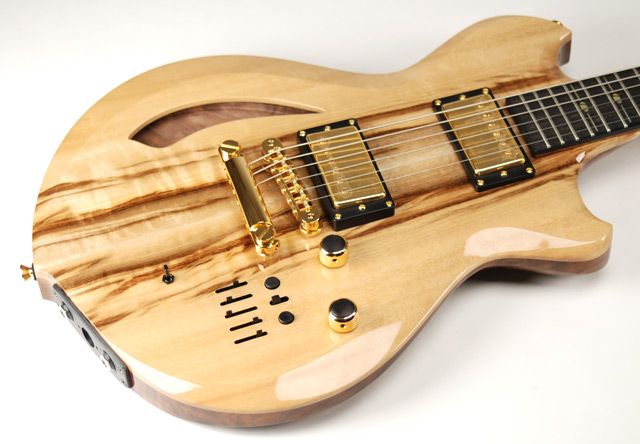 Breedlove Guitar Co. is currently located in Bend, Oregon where it produces some of the world’s finest guitars using exotic and experimental tone woods and electronics. Breedlove was started in 1974 by then surfer Kim Breedlove, who decided to make a living designing guitars and other stringed instruments while on trip to Mexico.

Company president, Pete Newport, spoke with Trent Salter of Musician’s Hotline in August 2005 saying, “It was on a six month surfing trip deep in Mexico that young artist and musician Kim Breedlove decided his life calling: to build stringed instruments. With a strong art background and refined design sense, Kim Breedlove acquired the tools, the training and a keen interest in building guitars, mandolins, banjos and other fine instruments in 1974.

He began to educate himself on the finer points of crafting quality guitars and soon became quite the accomplished luthier. Though Kim is the creative thrust behind Breedlove Guitars, the company itself was birthed by his brother, Larry Breedlove and friend Steve Henderson who partnered up and started the legitimate company in 1990. Kim Breedlove still works for the guitar builder as a master luthier.

A Tradition of Conservation

In their inception Breedlove was a very traditional guitar building company, creating instruments that were acoustic in nature and geared toward the fingerstyle guitar player. Breedlove used woods naturally occurring in and around the company’s home base in Oregon seeking to push the envelope in creating instruments of the highest quality. “Breedlove Guitar Company is engaged in an ongoing effort to reduce the environmental impact of our business activites,” writes the company in speaking to the press in January of 2008. “As a company and as individuals, we are already extremely aware of environmental issues, a fact that is reflected in our lifestyles and habits. But we realize we can do much more to decrease our energy consumption, decrease direct and indirect CO2 emission, and increase livability.”

The differences came quickly as the company looked to create unique body styles for their instruments and rapidly began to branch out into the electric guitar side of the industry. Electronic systems were developed for Breedlove acoustics and electric guitars in a continuing trend of guitar companies seeking to keep control over the entire instrument in-house.

Breedlove guitars also employ very modern technology coupled with their traditional hands-on luthiering approach. The Polhemus FastSCAN Cobra is one device that allows the guitar’s individual parts to be scanned in a mesh format then saved to a computer as data files where they will be used to cut parts to the exact dimensions the original luthier built them to. This slices the time of a job that would normally take days into one that requires only hours to complete.

The Mark I Chambered Electric Guitar is a perfect example of Breedlove’s attention to detail and advanced work with electronics. Created to be lightweight and responsive, the Mark I features an asymmetrical mahogany body, with a carved top of either Redwood or Maple.

Their signature headstock is fitted with Gotoh 510 tuners, and ebony peg overlay. Lollar and Seymour Duncan pickups are employed to give the Mark I the tone that would belie its slight frame. The guitar has also been ergonomically designed to cut down on the strain performers might feel from a long set or extended periods of playing. Breedlove provides excellent custom shop work as many of its guitars are built to the guitar player’s exact specifications.

Learn Why and How to Tune a Guitar

Getting that First Note Right

Without a reference to assign a note to, someone who is unfamiliar with music will likely have problems trying to tune that first E string. There are a few simple solutions that you can try.

First, you can play an E note on a piano (granted that it is tuned properly) or a keyboard, where you don’t have to worry about tuning. To make things easier, when you play the E key, use the sustain pedal so that both hands can be used to tune the guitar. After playing an E on the piano, start plucking the low-E string on the guitar and start turning the tuning peg (found on the head of the guitar) until the note sounds the same.

If the notes are starting to sound pretty close and you don’t know when the note sounds exactly the same, try paying attention to the vibrations of the guitar. When two dissimilar notes are being played, the note will sound wavy, the farther the notes are from each other, the closer together the waves will sound. As the notes become closer together, the waves will slow down. Two notes that are exactly the same will have no wave-like sound.

If you don’t have a piano or a keyboard, another useful gadget for tuning a guitar is a tuner. Although some may look at it as “cheating”, a guitar tuner is one of the easiest ways to make sure that all strings are in tune. Another, lesser known, option is to use the telephone. A dial tone is actually the sound of an F note. By plucking the E string while holding down the string on the first fret, you will play the F note. Similar to how you tuned the guitar to the piano, match the sounds of the string you are plucking to that of the dial tone. Once the first string is tuned, you can easily move on to tune the remaining strings.

Tuning the Other Strings

Once the bass note on a guitar is tuned, the other strings are much easier to tune. Each string’s note is 5 steps higher than the next (with the exception of the B string, which is 4), making it easy to tune them to one another. If you press down on the low E string on the fifth fret and pluck it, you will be playing an A note. Similar to how you tuned the E string, turn the tuning peg that corresponds to the A string and match the sound of an open plucked A string to that of the E string being played on the fifth fret.

If this seems confusing, here is a diagram using guitar tablature to help better describe it. If you are not familiar with guitar tablature, refer to the article Learn To Play Guitar by Tablature.

Seen in this diagram, with the column of “x” separating different notes, each note played on the fifth (or fourth for the G string) corresponds with an open note played on the string above it. Each set of “5-0” and “4-0” notes are the exact same note.