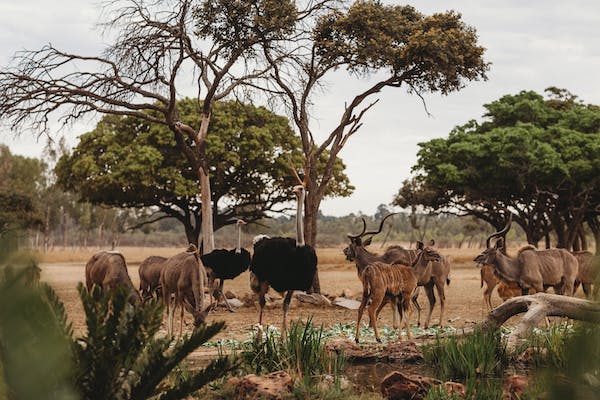 In the North West corner of South Africa lays the relatively unknown Marakele National Park. Due to the distance from Gauteng and the prohibitively hot temperatures during the summer months, this resort remains virtually unknown to the public. Those who discovered the park with its abundant bird life and beautiful scenery often return to experience the tranquillity the park offers.

Where is Marakele National Park?

In the north west of the Limpopo province, the Marakele National Park nestles in the Waterberg Mountains. Approximately 250 kilometers from Gauteng and in a malaria free zone, this park should attract much more visitors than it does already.

With easy access to the town of Thabazimbi about 12 kilometers away, visitors will not feel hard pressed due to the lack of shops and restaurants at the park. The gate opens at 07h30 during the whole year and closes at 17h30 from May to August and at 18h00 from September to April.

Marakele National Park offers two types of accommodation, camping and tented huts, while a private lodge, operated by the Marataba Safari Company offers luxury accommodation in a concession area of the Marakele Park. Neither the campsites nor the tented camp is fenced and visitors can expect to see an abundance of wildlife around the accommodation.

Thirty-eight campsites are divided into three clusters with an ablution facility each. The sandy and shady campsites are a firm favorite during the winter months when the temperatures around the park are more moderate. The campground is situated in the smaller part of the reserve and close to the entrance gate.

The Thlopi tented camp is situated approximately 17 kilometers from the entrance gate. Accommodation at the Thlopi tented camp consists of nine safari tents erected on wooden platforms. Each tent has en suite ablutions and a fully equipped kitchen on the veranda. Two single beds provide accommodation for adults while the management of the Marakele National Park will add stretchers for children.

The camp is unfenced and each tent overlooks the small dam in front of the verandas. Although the temperature during the winter months is moderate during the day, visitors should take warm clothing for the evenings.

Apart from the largest breeding colony of Cape Vultures, Marakele National Park offers tourists the opportunity to view a variety of other wildlife that is not often seen elsewhere. Reedbuck, mountain reedbuck, eland and tsessebe are some of the antelope species found at Marakele.

The drive up the narrow tar road to Sentech towers will render large tree ferns, cycads, a large variety of birds and mountain animals while both black and white rhino travels the plains. The view from the top of the hill is spectacular and atones for the often hair-raising drive along the winding road.

Most of the roads can be negotiated by normal sedan vehicles, but a vehicle with high clearance must be used on the gravel sections of the park.

South Africa has plenty of beautiful national parks. Table Mountain National Park (formerly known as the Cape Peninsula National Park) is one of them and stretches along a distance of approximately 60 kilometers, encompassing magnificent valleys, bays, the spectacular Table Mountain and the legendary Cape of Good Hope.

Much of what Sir Francis Drake described in his log as “The fairest Cape we saw in the whole circumference of the earth” over 400 years ago, is now a protected area surrounded by the Atlantic Ocean in the west and the warmer waters of False Bay coast in the east.

The Table Mountain National Park has two world-renowned landmarks within its boundaries – the iconic Table Mountain which provides the city of Cape Town with a dramatic setting and the Cape Peninsula with its rich and varied flora and fauna, pristine coastline and towering cliffs. It is an ancient land, with history of human inhabitants dating back for centuries to the time when San hunter-gatherers and the Khoi people lived here.

An aerial cable way provides access to the top of Table Mountain, which has been in operation since 1929. In all those years there has been a 100% safety record. Extensive refurbishment was undertaken in 1997 with the installation of the current revolving cable car.

Animal and Plant Life in this area of the Table Mountain National Park is abundant and there are a variety of game species to see in this area, such as Eland, Red Hartebeest, Bontebok and Zebra, Chacma Baboons and many different bird species. Southern Right whales can be spotted in the ocean between June and November. Indigenous plant species include Proteas and Fynbos unique to this area of the Cape.

Beaches, Picnic Areas and Activities in the National Park

A vacation in South Africa in the Cape has much to offer. This area is a haven for outdoor enthusiasts, very popular with local South Africans and offers hiking, surfing, angling, picnicking, beaching and cycling opportunities against the spectacular backdrop of the mountains and coastline of the most south western point in Africa.

Close to the seaside village of Simon’s Town near Cape Town is the Boulder’s Beach famous for its large colony of Penguins. This beach is ideal for kids as immense boulders shelter the cove from currents and large waves.

Camps Bay is a favorite with the local South African Cape population with its wide, sandy beach, tidal pool and view of Lion’s head and the twelve Apostles mountains.

Chapman’s Peak drive is a scenic drive cut into the cliffs around the 592 meter Chapman’s Peak cliffs. The drive offers spectacular views of the beaches of Chapman’s Bay, Hout Bay and various other beaches and harbors. There are plenty of hotels and bed and breakfast accommodation in this part of South Africa.

Cape Point is a famous landmark in South Africa, which offers visitors a excellent viewing opportunities from the two lighthouses that adorn the point – one still functional. The lighthouse is accessible by foot or there is funicular available to take visitors to the top.

There are plenty of activities in the Cape Area of South Africa to suit all tastes. For example, the Victoria and Albert Waterfront provides an upmarket shopping experience, a visit to the Two Ocean’s Aquarium is a delightful outing for children and adults alike and there are plenty of wine farms in the region which offer tours and tastings almost all year round.