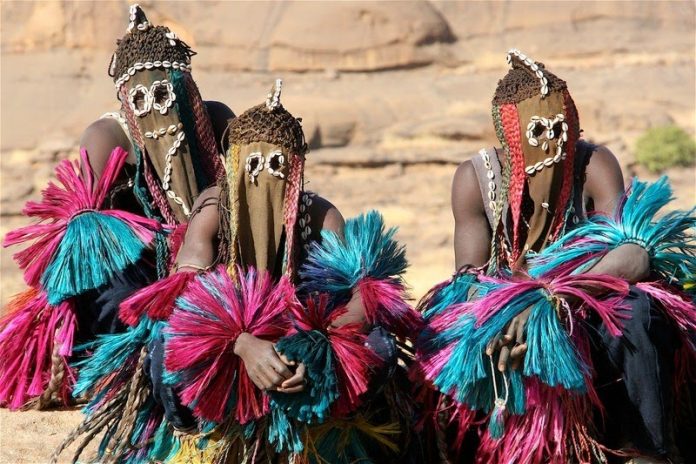 The Dogon, also known locally as the Sewa people, dwell mostly along the Bandiagara Escarpment, sandstone cliffs that reach 500m (1,640 ft) high and extend for about 150 km (100 miles). These cliffs are found in the central plateau of Mali, West Africa, near the city of Bandiagara. They live near the Niger River, and their location provides both water and safety. They live in mud dwellings built up against the cliffs, sleeping on the roofs of their buildings.

Description of the Dogon People

The Dogon people number between 400,000 and 800,000, and live in an isolated area, yet they are a tourist destination for those visiting Mali. They are known for their unusual architecture of cliff dwellings and mud buildings, their ceremonial costumes and masks which number over 65 different types, their artistic wood carvings, and their unusual folklore.

They fled Muslim invaders who sought to convert them and take them for the slave trade. Their location helped them avoid this, but some Dogon are Muslims and some are Christians today, though they are all animists by religion.

The Dogon determine their lineage patrilineally, with the oldest son of the common ancestor serving as the leader or chief of the group. They also elect a spiritual leader, the Hogon, who may have wives, but sleeps alone at night.

The sacred snake, Lebe, who was once a mortal transformed into a snake, comes at night to purify the Hogon by licking his skin, and imparting wisdom. Lebe is the earth-god who oversees the agricultural cycle.

In addition to the Lebe cult group there are also the Awa and the Binu. The Awa are involved in bringing peace to the dead spirits and celebrate the funerary and anniversary ceremonies of the dead. The Binu are involved in totem ceremonies.

Men may have up to four wives among the Dogon, but the norm is to have one wife. When first married the wife lives separately and may choose to leave her husband. When she gives birth to her first child, however, she moves to live with her husband and divorce from that point forward is rare.

One important ritual involves the thanking and appreciating of each other and the contributions that they make. Another cultural tradition is that each time two people meet, the one being visited asks about the visitor, and each member of the family. In return, the visitor asks about the visited person and each member of the family. The reply is usually sewa, meaning everything is fine.

All ceremonies and sacred sites seem to relate to Nommo, the first ancestor created by the sky-god Amma. Nommo soon split into six sets of twins. One of the twins rebelled against Amma. Amma then sacrificed a Nommo and scattered his parts throughout the universe. (This can be compared with the Egyptian myths of Isis, Osiris and Horus) The twins of Dogon myth also relate to polarity, good and evil, and the twin Sirius stars.

The creation myths have many versions and are quite complex. They all emphasize the ancestors and the people and places along their migration to their current location. Proper ancestor worship is important to bring the benevolence of the ancestors in bestowing blessings upon the Dogon.

The Dogon and the Egyptians

The Dogon tribes are thought to have originated in ancient Egypt due to significant traditions and oral myths which relate to Egyptian mythology and knowledge of astronomy. One interesting link to the ancient Egyptians is the practice of circumcising both males and females. They believe, as it is postulated that the ancient Egyptians believed, that in order for a child to develop into a complete male or become fully female, they must have a circumcision performed. Prior to the circumcision the children are considered neuter.

The Dogon follow closely the Dog Star, Sirius, and their mythology includes details of Sirius and its twin star. The Dogon have knowledge as to other solar system details such as the rings of Saturn and the moons of Jupiter not visible to the naked eye. M. Griaule and G. Dieterlen, early anthropologists who interviewed the Dogon over the course of many years stated “The problem of knowing how, with no instruments at their disposal, men could know the movements and certain characteristics of virtually invisible stars has not been settled, nor even posed.”

Some theorize that the knowledge of the Dogon was handed down from Egyptian priests. Robert K.G. Temple has argued that the knowledge the Dogon people had in relation to the stars must trace back to the ancient Egyptians, and even further to the existence of extraterrestial sources of astronomical knowledge, who transmitted information to the ancient Egyptians. These theories about the Dogon people’s knowledge of the stars, and particularly of Sirius, are all extremely controversial, and not accepted by most scholars. 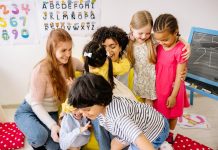 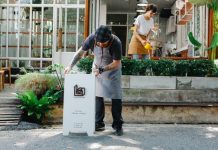