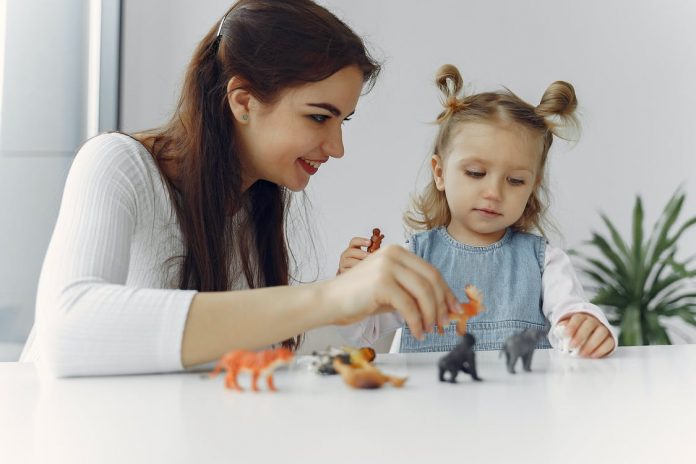 In the book, R is for Rainbow: Developing Young Children’s Thinking Skills Through the Alphabet by Sandra Anselmo, Pamela Rollins and Rita Schuckman give hands-on and active learning activities that teach an understanding of each letter of the alphabet rather than memorizing each letter name.

Each activity teaches a child that the letter is not only a symbol but it has a sound and this letter sound makes up a word that a child understands. For example, an apple begins with the letter Aa but it is an object a child has seen in his or her home and has eaten this fruit.

Making connections at the child’s level is important to understanding the alphabet. It is just not memorizing the shape of the letter and reciting its name, it is finding out how that letter related to something in the child’s world.

Here are some activities for the classroom:

Letter A Items from Home

Have children bring in items beginning with the letter Aa. Children may bring in items such as: an alligator, apple, animal, ambulance and a picture of an anchor. Using these items can they then be placed on a tray to play a game of memory. Showing the items on the tray for three seconds then covering the tray to then take one item away. Showing the tray again can students guess what Aa item is now missing.

Ambulance Letter A: Using a template of an ambulance make an uppercase letter A on the ambulance. Cut up construction paper into 5 cm squares. When printing the A on the paper, ask the student a few questions. “What letter is this?” and “What sound does this letter make?”. Then ask the student to glue squares on the letter A. This activity can go home at the end of the day.

Apple Letter A: Using a template of an apple write a lowercase a on the paper. Using 5 cm paper squares, cover the letter with these squares. Again ask each student these questions. “What letter is this?” and “What sound does this letter make?”

Food Beginning with A: Bring in some treats for the class. Some suggestions are: applesauce, asparagus, apple pear, apple pie or apple juice.

Apple Story: Read “The Little Red House With No Doors or Windows and a Star Inside” to the class before making the apple prints. It is a great story for children to listen and discover a star in the middle of an apple.

Make Apple Prints: Provide red, yellow and green paint on paper plates. Taking groups of two or three ask which colour each would like to use. Give each student a half an apple and allow the student to fill the paper with apple prints.

Animals Wild or Tame Activity: Show children pictures of animals both wild and tame. After each picture ask the students where does each belong in a zoo or on a farm.

Bingo Dabber Art: Using a bingo dabbler and two blank sheets of paper, have the student dab out both upper and lowercase letter A. A student can also use two different colours to create a pattern while dabbing out the letter. This activity can go home at the end of the day.

There are many fun-filled hands-on ways to teach children about the letter Aa. It is important to remember when teaching the letter Aa to teach both uppercase, lowercase and letter sound at the same time. Making apple prints or eating foods that begin with the letter Aa are all fun ways of learning this letter.