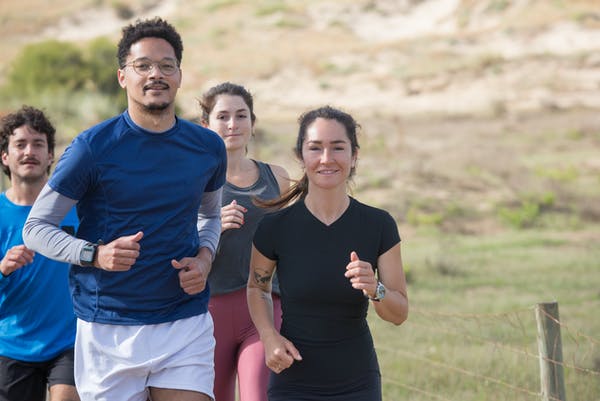 Are you interested in learning how to run? Did you enjoy track and field when you were younger, but have fallen out of the habit and wish to start running again? Are you a couch potato who wants to lose weight and get in shape but isn’t quite sure how to go about it? There are several easy and effective ways to learn how to run.

The primary way to become good at running is by doing lots and lots of it! You can read all the books one wants and purchase only the most expensive shoes and running pants, but they will do very little good if you don’t actually practice. That said, trying to do too much too fast is likely to cause physical injury and burnout. If you are a novice runner or have never run before, the best way to learn how to run is to do so slowly and while following a set training program.

Visit Your Local Running Store: Training to Run for Beginners

One option for those how want to learn how to run is to visit the local running store. These stores will sell shoes and running gear, will know where to find good running paths or trails, and will often host running classes. Although these classes will vary from store to store, most take place over an 8 or 12 week period and will involve at least one guided run per week.

Store staff will provide runners with a weekly schedule in which runners will slowly work their way into running. The first few weeks might involve a schedule in which participants alternate running and walking, and the later weeks would involve participants running for progressively longer intervals. The purpose of this graduated running schedule is to avoid over-fatigue and burnout, as well as allowing the body to slowly and safely get used to the physical stress involved in running.

If you want to save money, or for those who live far away from a dedicated running store, another option is to follow the popular training program Couch to 5k. Designed by a former coach-potato turned exercise fanatic, the Couch to 5k is a free training program that promises to train anyone how to run a 5k in only nine weeks time. The Couch to 5k follows a progressive running schedule and advises participants to go running three times a week.

For those who enjoy running to music, there are also several podcasts available online to download and listen to while following the Couch to 5k running program. These podcasts play music with a fast beat suitable for runners, and will inform listeners when they should run or walk.

Run With A Buddy: Running Clubs and More

Running can be a great social activity. If you have friends or family who also want to get fit, consider teaming up with them. Make plans to go running together two or three times a week for at least 30 minutes each time, and hold each other to this promise.

Alternatively, look for local running clubs or groups in your area. This can also be a great way to meet people and make new friends, and running groups tend to be very welcoming to beginners and new runners. Running stores will often know of local running groups, but you can also visit social meetup groups such as Meetup. Meetup often has running groups, and will mention what speed and skill-level to which they are geared. Look for a running group that is beginner-friendly, and have fun!

Tips on How to Run a Marathon

A marathon is a long distance run totalling 26.2 miles. According to Mr Kevin Barry, (three times marathon participant, in aid of cystic fibrosis, with an outstanding record achievement of 3 hours and 34 seconds) people take part in this event for a number of different reasons; for charity, fitness or simply because someone asked them to do it.

“The road is your oyster,” says Mr Barry. To many, running a marathon seems like a daunting task, with little or no hope of getting to the finish line. For others, it represents a daring challenge and they are only too willing to take part but due to a lack of preparation, drop out of the event less than halfway through the marathon, frustrated and disillusioned. So what needs to be done in order to go that extra mile?

Tips on how to run a marathon

Day of the marathon

Before you begin the marathon, you have to submit a time you will think you’ll complete the race so you can be slotted into the right time zone. “There is a huge buzz on the day, 10,000 people are waiting to start, five minutes to go before the marathon begins, the tension in the air is palpable as participants are lined up at the starting line, excited and nervous, stretching and doing warm ups and there are long queues for the toilets,” says Mr Barry.

Getting to the finish line of a marathon is a remarkable achievement that takes a considerable amount of perseverance and determination but if you are adequately prepared and willing to put in the extra effort, who knows, anything is possible!