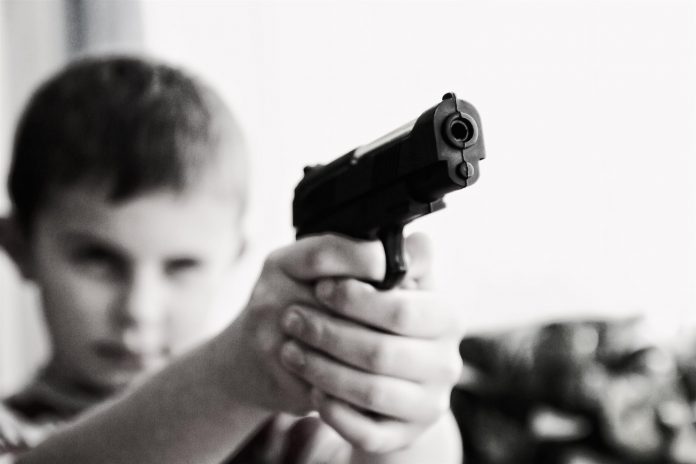 In the past a game of cowboys and Indians or cops and robbers with American flag shirt was seen as harmless fun, but in the wake of changing attitudes to war and the escalating level of gun crime and accidental deaths, seeing a child running around with a realistic toy gun chills most parents.

It has been a long standing argument with doctors, psychologists, behavioral scientists, parents, law enforcement and politicians all weighing in with their opinions.

Should A Child be Given A Toy Gun?

This really depends on how much parental guidance is given and what type of toy gun is given to a child. It is true that children especially boys will make a gun out of anything, a banana, a stick or a finger. The thing is these are imaginary guns and the child usually recognizes this, even pop guns and water pistols are recognizable as fakes, but it seems with the proliferation of violent crime, the proliferation of lookalike weapons has gone hand in hand. To see a child running around with a realistic semi-automatic gun is horrifying to most parents. They look so real. The ultimate decision in whether a child should have a toy gun is entirely in the hands of parents. The decision should be taken carefully and with several arguments in mind.

Toy Guns And The Real Thing

As to whether toy guns make a child immune to real guns, there is a distinct possibility that the look of toy guns has an impact on this. Some children are in no real position to judge the difference between a plastic gun that looks like the real thing and an actual gun. This may be due to age, developmental level, or emotional/behavioral personality. This is distinctly different from the idea that a banana will be used as a gun and a child recognizing it is actually an imaginary gun. The realistic toy guns can lead to serious accidents. A child may also believe that their familiarity with the toy gun means that they are capable of handling the real thing without problems or repercussions.

Buying realistic toy guns for a child is probably foolhardy and a child having any toy gun without accompanying adult input could also be extremely detrimental. Parents need to step up and make an educated decision about whether a child should be allowed toy guns, what types should be allowed and how to communicate the pitfalls of real guns and their dangers. Remember more than one child dies every day in the USA from gun related violence and accidents. The argument about toy guns and children include aspects of parental guidance with toy guns, whether toy guns make children more violent and if banning toy guns would be beneficial as well as whether toy guns contribute to a child’s level of violence as much as TV, video games and movies.