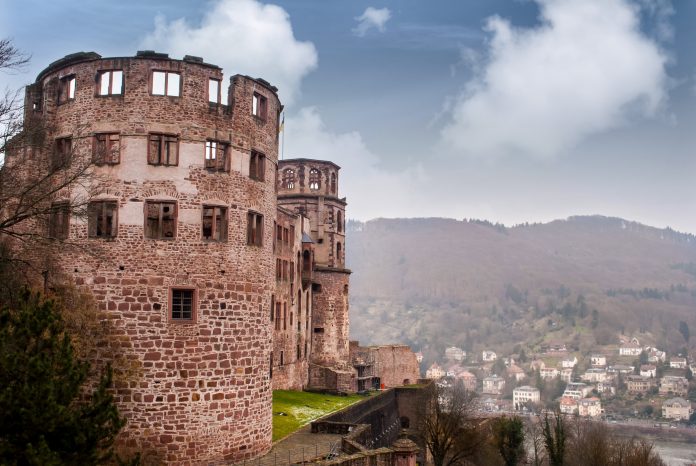 Heidelberg is one of the most popular tourist destinations for foreign travelers to Germany. Heidelberg on the Neckar is mostly famous for its historic university (founded in 1386), romantic castle ruins, and Baroque old town.

The castle ruins towering over Heidelberg’s old town are the loveliest and most romantic ruins in Germany. Much of the tourist allure of Heidelberg is based on this amazing mostly Renaissance castle and palace that once served as residence to the powerful Prince Elector of the Electoral Palatinate (Kurpfalz).

The castle’s history goes back to at least the early thirteenth century but most of the surviving and restored buildings are Renaissance or early Baroque. The castle was destroyed several times: by thunderbolt in 1537, by the French army during the War of Palatine Succession in the late seventeenth century, and again in 1764 by thunder. Large sections were restored during the nineteenth century.

The main sights to see in Heidelberg Castle are:

French troops completely destroyed Heidelberg in 1688/89 and 1693. The Romantik Hotel Haus zum Ritter (Knight’s House – named after the bust of St George on the façade) is the only building that survived from the Renaissance. The rest of the old town is Baroque but built on medieval Gothic foundations as is clear from the narrow streets and alleys.

The Heiliggeistkirche (Holy Ghost Church) is late Gothic and was rebuilt in the old style after its destruction by the French. The church once housed the famed Palatinate Library (Biblioteca Palatina), considered the largest single collection of books during the seventeenth century. The library was transported to the Vatican during the Thirty Years’ War (1618-48) and never returned. From 1706 to 1936, a wall separated the nave and chancel because Lutheran and Roman Catholic congregations shared the same building.

The Studentenkarzer (Students’ Prison) is a popular sight. It was a jail where students could be imprisoned – the university enjoyed many immunities and own jurisdiction – for minor transgressions such as public drunkenness. The walls are filled with graffiti – often in Latin.
The Kurpfälzisches Museum (Electoral Palatinate) has an eclectic but interesting collection. The most famous item is the jaw of Homo Heidelbergensis, who roamed the earth around 500,000 years ago. The collection of Romantic period painting is also famous, as is a Tillman Riemenscheider masterpiece – the Windheimer Altarpiece of the Twelve Apostles.

The close proximity to Frankfurt International Airport (FRA) makes Heidelberg an ideal first stopover after an intercontinental flight. The Romantik Hotel Haus zum Ritter is often considered one of the most popular hotels with foreign visitors in Germany.