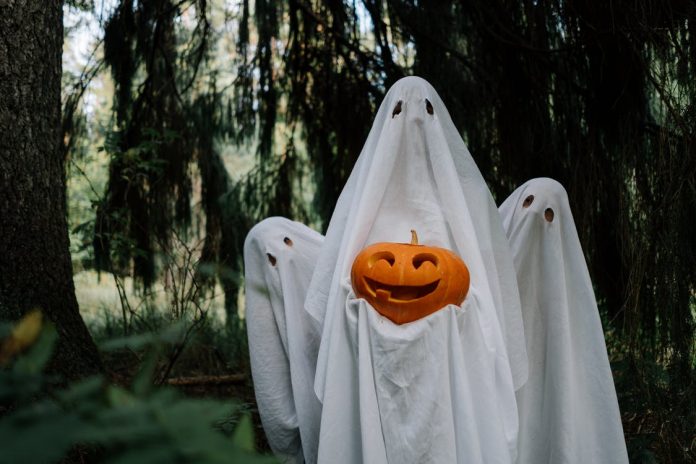 During the month of October spooky decorations adorn store aisles and neighborhood houses with eerie displays of carved pumpkins, screeching black cats, and ethereal ghosts. Cackling witches on broomsticks mingle freely with creepy bats and silent owls. How did these items come to symbolize Halloween?

Black cats have long been considered to be spiritual animals. Superstitions link them to witches, being able to sense good and evil spirits, even being incarnations of people themselves. Given the old beliefs that ghosts could return to earth and supernatural powers were strongest on the night of Halloween, black cats naturally became associated with this holiday.

Many superstitions persisted about witches, including one which involved wearing clothing inside out and walking backwards outside in order to see a witch flying through the sky at midnight on Halloween.

At one time it was believed that owls would swoop down on Halloween night and eat the souls of the dying, and people could be protected from this by pulling out their pockets and leaving them hanging out. Bats were thought to indicate the presence of spirits or ghosts. One superstition held that if a bat flew around a house three times on Halloween, death would be coming soon.

During Samhain the Celts would wear costumes usually made from animal skins. As the church added All Saints’ or All Hallows on November 1st and All Souls’ on the 2nd, the celebrations together began to be known as Hallowmas. October 31st came to be called All Hallows’ Eve, and eventually shortened to Halloween. The festivities resembled Samhain with bonfires and costumes such as angels and devils.

The History of Halloween

The modern holiday of Halloween originated in Ireland and underwent changes through the influence of Roman conquerors and Christianity. Eventually, the celebration made its way to North American shores and became the day we now observe on October 31.

The festival of Samhain was observed by the Celts over 2,000 years ago. In areas of the UK and Ireland, people would gather to celebrate their new year on November 1. The day before, which they referred to as Samhain, was thought to be a time when the boundaries between the material and spiritual worlds were blurred and spirits were free to walk the earth. The cold season, which was often associated with death, began shortly after the New Year, so during this transitional period they believed that the dead could visit them and wreck havoc on their lives.

They believed that these spirits would cause trouble by destroying crops and performing other mischievous deeds. The Druids, or Celtic priests, used the opportunity of Samhain to make predictions about the future of their people. The Druids encouraged people to burn crops and animals as sacrifices in giant bonfires that they would build to mark the occasion. Perhaps as a way to confuse the troublesome spirits, the Celts wore costumes during Samhain, usually made of animal skins. When the celebration was over, they would light their hearths with fire from the sacrificial bonfire. They believed this special fire would protect and warm them through the winter.

The Romans had conquered much of the land inhabited by the Celts by A.D. 43. The two cultures combined their traditions as time went on and two Roman holidays became connected with the Celtic celebration of Samhain. Feralia was celebrated in late October by the Romans to honor the passing of the dead. Another Roman holiday, observed at around the same time, was a day devoted to honoring Pomona, the goddess of fruit and trees. This is believed to be where the tradition of bobbing for apples came from, since the symbol of Pomona was the apple.

The Christian faith had spread throughout the region by the 800s and its influence also came to shape the holiday we call Halloween. In an attempt to negate the pagan tradition of Samhain, the church tried to incorporate its own annual celebration to honor the dead. Pope Boniface IV declared November 1 to be All Saints’ Day (also referred to as All-hallows or All-hallowmas in Middle English) to honor saints and martyrs. The day before, once called Samhain, began to be referred to as All-hallows Eve. Eventually this morphed into Halloween.

Various practices and traditions related to Halloween travelled to North America along with European immigrants. The customs of these new Americans combined with some of the practices of the Native population and the holiday began to take on a distinctive American feel. In the southern colonies, Halloween festivals were celebrated to bring communities together to dance, sing, share stories and tell fortunes.

Many Americans held festivals to commemorate harvest or autumn, but Halloween did not become a common practice across America until the late nineteenth century with the arrival of a large number of immigrants, including many from Ireland. With the influence of Irish and English immigrants, Americans began dressing up in costumes and going door to door asking for food or money, while young women believed they could see the image of their true love by doing tricks with yarn, apple parings or mirrors. These two practices were the basis of the modern practice of trick-or-treating.

Authority figures attempted to take the scary out of Halloween in the late 1800s by encouraging people to gather with their neighbours for celebrations that consisted of foods of the season, festive costumes and games. This move succeeded in eliminating much of the religious and superstitious aspects associated with the holiday. During the baby boom of the 1950s, Halloween became a holiday celebrated mainly by children and the old practice of trick-or-treating came back into fashion. People could avoid having incidents of vandalism directed at them during Halloween, which became a common occurrence in the 1920s and 30s, by providing kids with treats.

These days Halloween is celebrated in one form or another in many countries around the world. North American Halloween consists mainly of costume parties, trick-or-treating and ghoulish decorations. America spends 6.9 billion dollars per year on Halloween, second only to Christmas in terms of commercial holiday spending.