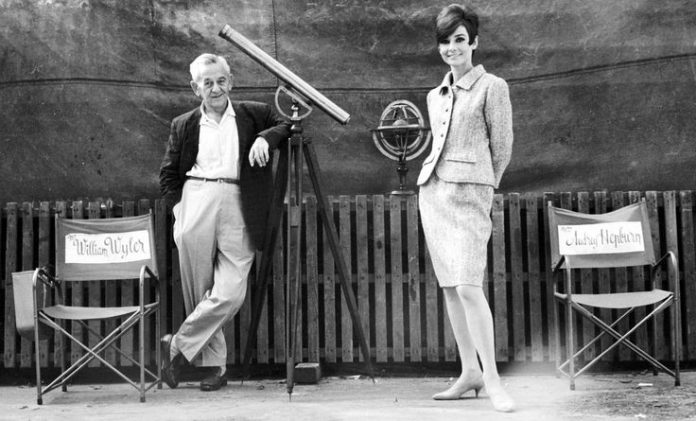 After the less than nebulous decline of the studio system in the mid-1960s, How To Steal A Million appears as almost an anachronism in the context of its release in 1966. Distributed by Twentieth Century Fox Film Corporation (one of the last powerful vestiges of studio clout), the film embodies an unusually frothy formula–one that William Wyler had typically shied away from with his prior work, most notably Roman Holiday and Wuthering Heights.

As if to hit this point of effusiveness home, the original title of the movie was slated to be How To Steal A Million Dollars and Live Happily Ever After, which might have been giving just a little too much of the plot away. In addition to being a momentous film based on largely ignoring audience desires of the time, it also stands out for being Hepburn’s final role as the female ingenue.

Like the films Hepburn starred in before her second Wyler collaboration, How To Steal A Million emphasizes the offbeat charm and beauty of Audrey’s style. It also continues the recurring relationship each of her past characters shares with either an older man or father figure (e.g. Roman Holiday, Sabrina, Funny Face, Love in the Afternoon, and Charade).

Another seminal aspect of the Hepburn persona is the costuming of her character, Nicole Bonnet. Moreover, her history with Givenchy, a sartorial partnership that began with Sabrina, proves to be indispensable, particularly in the scene where she arranges a conspiratorial meeting with Simon Dermott (Peter O’Toole) at the Ritz. Wearing patterned sheer black tights, a black dress, and a black veil that covers half of her face, Hepburn is stunning–captivating the camera lens as though she is performing a burlesque show rather than just sitting in a booth smoking a cigarette.

Hepburn’s subsequent film, Wait Until Dark, wherein she plays a blind woman, is unlike any other role she had ever played, especially in contrast to How To Steal A Million. Despite being only a year older during the making of the movie, Hepburn appears far more attenuated. While perhaps a testament to her acting skills, this shrunken and helpless persona was in sharp opposition to some of Hepburn’s most famous roles (Holly Golightly being the most obviously different).

In addition to Hepburn’s filmic efficacy in terms of enchanting audiences with her fashion sense and magnetism, William Wyler was an incontestably valuable asset to the stylized and, at times, campy feel of How To Steal A Million. In the wake of How To Steal A Million, Wyler would also direct the Barbra Streisand classic Funny Girl, which How To Steal A Million undeniably prepared him for with regard to the screwball plot, lustrous cinematography, and the creation of chemistry between two seemingly opposite characters.

As with Wyler’s numerous other films, everything he touched seemed to turn to gold. Mrs. Miniver, The Best Years of Our Lives, and Ben-Hur each garnered Wyler an Academy Award for the Best Director category. Although How To Steal A Million did not win quite the same amount of critical praise, it raked in enough to compensate for the six million dollar budget it commanded from Fox. Furthermore, Harry Kurnitz’s script was nominated for a WGA award in 1967.

As mentioned, Audrey Hepburn’s filmography shows the distinct trend of an extreme attachment to and exaltation of her father. The Electra complex, a psychological condition that is considered the female counterpart to the Oedipus complex, infers an unnatural romantic desire for one’s father. Traces of this syndrome are present in How To Steal A Million’s main character, Nicole. Another example of a Hepburn character exhibiting signs of the complex is Sabrina in the film of the same name and Ariane in Love in the Afternoon.

Where Nicole Bonnet diverges from the complex is in her attraction to Simon, the supposed high-class thief she enlists to help her steal the fake Benvenuto Cellini sculpture of Venus, a man who is the antithesis of Nicole’s father, Charles Bonnet (Hugh Griffith). Where Charles is heedless, absent-minded, and self-indulgent, Simon is cautious, pragmatic, and altruistic. Together, they are the ideal foil of the breed of men in Nicole’s life.

The primary arc in Hepburn’s character at the conclusion of How To Steal A Million is her sudden ability to relinquish her previous perception of right and wrong. Formerly, she was vehemently opposed to Charles’ endless art forgeries, but, by the end, she realizes she must accept her father’s actions, even though they force her to commit illegal exploits to gird him from harm’s way. Simon describes her new outlook best in the second to last line of the film as he notes, “You know, for someone who started lying just recently, you’re showing a real flair.” She replies, “Oh thank you!”